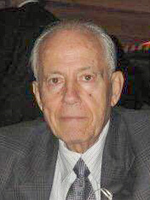 Evangelos Makropoulos passed away peacefully on Wednesday, January 1, 2020 at Roosevelt Care Center in Edison, NJ. He was 91. He was born in Pireaus, Greece, to the late Ioannis and Maria (Tsanpouri) Makropoulos. He and his beloved wife of 59 years Olga (Andronikou) Makropoulos immigrated to New Brunswick, NJ in 1955 and later settled in Edison where they raised their three wonderful children Konstantine, Maria & John. He served in the Greek military where he also completed his technical electrical training, working on military electrical installations and machinery. He advanced to Army Sergeant before fulfilling his dream to immigrate to America. He began working as a furrier in New York City, becoming a master craftsman and at night attended the Middlesex County Technical Education program. After receiving his electrical certification, he was employed as an electrician by Fedder's Corporation and later American Can Company in Edison. He was a devoted member of the St. George Greek Orthodox community in Piscataway, serving the needs of the church for many years. He and his wife were very committed to their Greek Orthodox faith & heritage and supported many philanthropic causes. He is predeceased by his son Konstantine Makropoulos, wife Olga and siblings John Macris of Cherry Hill, Chryssa Tsamouras and Fotini Makropoulos of Piraieus, Greece. He is survived by his children- Maria & George Psyllos, John & Maria Makropoulos; his grandchildren- Elias & Tatiana Psyllos, Olga & John Mavrianos, Zoe, Evangelia & Haralambia Makropoulos; and great-grandchildren- George Psyllos, Stamatis, Sophia and Alexander Mavrianos; loving family and friends in Greece and the United States. Visitation will be 5 PM to 8 PM Monday, January 6, 2020 at St. Georges Greek Orthodox Church, 1101 River Road, Piscataway. Funeral services will be at 11:30 AM Tuesday, January 7 at St. George Greek Orthodox Church. Interment will follow in Van Liew Cemetery in North Brunswick. In lieu of flowers please make donations to St. George Greek Orthodox Church Memorial Fund. Arrangements are under the direction of Selover Funeral Home, North Brunswick.