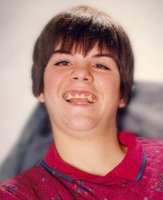 Alicia J. Garrity died Sunday, March 15, 2020, at JFK Medical Center in Edison. She was 48. Born in New Brunswick she lived in North Brunswick before moving to Edison 18 years ago. She was a communicant of St. Francis Cathedral in Metuchen. Surviving are her mother Judith (Weiss) Garrity of North Brunswick; her father William F. Garrity and his wife Janet of Newark; three brothers – William F. Garrity, Jr. and his wife Shannon of Lawrenceville, Kevin Garrity and his wife Lauren of Manalapan and Robert Medel of North Carolina; two sisters – Destinee Garrity and Wynter Garrity, both of Newark; four nieces and two nephews. Private funeral services are under the direction of Selover Funeral Home in North Brunswick. The family will have a celebration of Alicia's life to be announced and held at a later date.