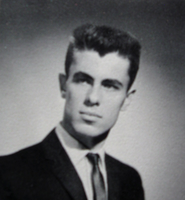 Robert J. Schlank died Thursday, May 14, 2020, at Complete Care at Green Knoll in Bridgewater. He was 75. Born in New Brunswick to the late Robert J. and Dorothy (Giamerese) Schlank, he spent his childhood years with his family in East Brunswick. In his twenties, he moved to a duplex in New Brunswick, where he resided for most of his life prior to spending his final months at the Green Knoll in Bridgewater. He attended California Institute of Technology and Newark College of Engineering and had worked as an engineer prior to his retirement. Mr. Schlank was known for his passion for computers and cars and his lifelong respect for family traditions and community values. Surviving are his sister Rosemary Schlank of Rye Brook, New York; his brother Ronald Schlank of Estes Park, Colorado; and his nephews Parker Schlank of Lakeville, MN, Taylor Schlank of Mechanicsburg, PA, and Carter Schlank of Roseville, CA. Private funeral services with burial in St. Peter's Cemetery in New Brunswick were under the direction of Selover Funeral Home, 555 Georges Road, North Brunswick.