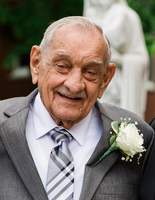 Edward Paul Wlodarczyk, Sr. died Friday, June 12, 2020, at Robert Wood Johnson University Hospital in New Brunswick, at the age of 92. Born in the Parlin section of Sayreville to the late Joseph and Mary (Paprota) Wlodarczyk, on July 1, 1927. He lived in New Brunswick for the past 62 years. He was a supervisor for the Photo Department at E.I. DuPont de Nemours and Company in Parlin where he worked for forty years before retiring in 1989. In June 1942, addressing his eighth grade class at their graduation ceremony from Roosevelt School in Sayreville, young Edward, known as “Ribs”, gave a speech titled, “Democracy Calls.” The title itself was foreshadowing of what was to come. When the United States declared war on the Pacific front in 1941, Ribs was anxious to join the cause. At the end of his junior year of high school, June 1945, he left school to enlist in the US Navy. After completing boot camp he was assigned to a ship in the Pacific fleet. The train he took cross country, broke down, delaying his arrival in California, causing him to miss the ship he was assigned to. God had a plan. That ship was torpedoed and sunk before he arrived. Instead he was reassigned to the USS Bunker Hill and later the USS LCS (l) (3) 130, serving till the end of WWII in the Philippines. He received the American Theatre Medal, Asiatic Pacific Medal, and the Victory Medal before separating from the Navy in August of 1946, as a Seaman First Class USNR. Upon returning from active duty, he finished high school, receiving his diploma alongside his younger brother, Stanley (Basil). In addition to being a WWII veteran, he was a member of the Parlin Buck Club. A sportsman at heart, he enjoyed swimming, fishing, hunting and golf. He was a Boy Scout leader for his son’s troop # 115 in New Brunswick. He shared his love of the outdoors and camping with the scouts in his troop. He loved to garden and was proud of the vegetables he grew every summer. His family and faith were most important to him. He grew up as an active member of the St. Stanislaus R.C. Church in Sayreville, and raised his family as a communicant of St. Mary of Mount Virgin R.C. Church in New Brunswick. Family always came first. He was married to his wife Ann (Goldyn) Wlodarczyk for 62 years, until her death in December 2019. He was also predeceased by his sisters - Mary Mazuroski (husband Stanley Mazuroski) Stella Wlodarczyk, Bertha Jackubowski (husband John Jackubowski) and Veronica Puhan (husband Stephen); his brother - Stanley Wlodarczyk; his son-in-law John Krzeminski; and sisters-in-law and brothers-in-law – Kate Wlodarczyk, Rose Goldyn, Mary Zamorski, Stephen Skarzinski, Anthony Goldyn, Edward Goldyn, Joseph Jocus, John Jocus, Michael Wierzbicki and Charles Korsak. Surviving are two daughters – Bernadine Krzeminski of Somerset and Carol Squindo and her husband Al Ribaudo of Monroe; his son Edward Wlodarczyk, Jr. and his wife Sharon of Southbury, Connecticut; his sister Josephine Skarzynski of South Amboy; seven grandchildren – Thomas Squindo Jr. (wife Nancy Squindo), Cynthia Trautwein (husband, Christopher Trautwein), Kimberly Fischer (husband William Fischer), John Paul Krzeminski, Kathryn Zavislak (husband Mark Zavislak), Carolyn Wlodarczyk, and Edward Wlodarczyk, III; four great-grandchildren – Katie Squindo, William, Jack and Grant Fischer; and numerous nieces, and nephews and additional cousins in Bochnia, Poland. Private funeral services with burial in St. Stanislaus Cemetery in Sayreville are under the direction of Selover Funeral Home, 555 Georges Road, North Brunswick. In lieu of flowers, contributions may be made to the charity Sentinels of Freedom at, https://www.sentinelsoffreedom.org/donate/ . This charity supports injured veteran’s, the men and women who Grandpa (Ribs), always referred to as the real heroes of war; or a charity of one’s choice.