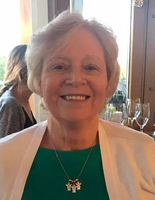 Elizabeth Ann (Sinkinson) Spaulding passed away Sunday, July 19, 2020, at her home in Kendall Park after a courageous nine year battle with idiopathic pulmonary fibrosis. She was 67. Known to her family as Betty Ann, many friends as Betty, and Bett to her husband and a few others, she was born in Philadelphia, Pennsylvania on February 9, 1953 to the late Edward and Mary Elizabeth (McConnell) Sinkinson. She grew up in Glenolden, PA and was a 1971 graduate of Archbishop Prendergast High School. While she was offered a scholarship to college, she opted to pursue a career in secretarial sciences. She and her husband, David, were married November 18, 1972. At the time, he was a commissioned officer in the United States Army. She joined him in Ft. Sill, Oklahoma, then onto Schofield Barracks, Hawaii (for 39 months), and then back to Ft. Sill, before he resigned his commission to return to civilian life. Their first son Christopher was born at Ft. Sill. They then moved to Maryland, where they lived for four years. Their second son, Douglas, was born in their home in Edgewood. They moved to North Brunswick, New Jersey in 1980 and remained there until moving to Kendall Park, NJ in 2016. Betty retired from Rutgers University in New Brunswick, NJ in 2013. An avid reader, she was a charter member of the Douglass College Book Club, which continues more than 25 years after its founding. After moving into Princeton Manor in 2016, she formed a book club, unofficially called "Betty's Book Club". Betty was a fantastic wife, terrific mother and a phenomenal grandmother ("MomMom"). She was always kind, friendly, gentle, caring and compassionate. She will be missed by many. Betty is survived by her husband, David; son Christopher and his wife Monica and grandchildren Brady, Caden and Sonia Renza Elizabeth of Belle Mead, NJ; son Douglas of Highland Park, NJ; sister Kathleen Sinkinson and her husband George Karadimas of Ellicott City, MD; sister Lorraine Fiorello and her husband David of Berwyn, PA; brother Edward Sinkinson and his wife Colleen of Lewes, Delaware; several nieces and nephews, three grandnephews and a grandniece. Visitation will be 5:00 PM to 7:00 PM Wednesday at Selover Funeral Home, 555 Georges Road, North Brunswick. A funeral Mass will be 10:00 AM Thursday at St. Charles Borromeo R.C. Church, 47 Skillman Road, Skillman, NJ. Burial will follow in Holy Cross Burial Park in South Brunswick, NJ. In lieu of flowers, please make contributions to the Pulmonary Fibrosis Foundation, 230 East Ohio Street, Chicago, IL, 60611. Covid-19 attendance limitations will apply at the funeral home and church, Mass will be live streamed on the church's website at www.borromeo.org.