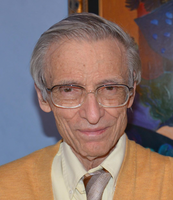 Vincent A. Padula, Jr. passed away peacefully of natural causes on Wednesday, August 26, 2020, at Seabrook Village Renaissance Gardens in Tinton Falls. He was 90. Vincent was born in Newark to the late Vincent and Mary (Tort) Padula. He was raised in East Brunswick and graduated from South River High School in 1947. He proudly served with the United States Army, 501st Comm Recon Group, in Korea from 1951 to 1954. Upon returning from the service, he went on to graduate from Seton Hall University. He taught elementary education in the Franklin Township school system for a number of years and later had a career as a corporate lab technician chemist. After retiring, Vince had many enjoyable years in Fort Lauderdale, Florida, but later returned to New Jersey and resided at Seabrook Village in Tinton Falls. He is survived by his sister, Joan Campbell, and brother-in-law, Robert E. Campbell, of North Brunswick; nephews – Robert J. Campbell and his wife Evelyn, and David Campbell and his wife Linda; nieces – Cynthia Flanagan and her husband Neil and Kathleen Campbell and her husband Michael; nine great nieces and nephews; two great great nephews; and a large extended family of cousins. A Funeral Mass will be 10:00 AM Monday at Our Lady of Peace R.C. Church in North Brunswick. Interment will follow in Holy Cross Burial Park in South Brunswick. In lieu of flowers donations may be made to the Korean War Veterans Association, P.O. Box 407, Charleston, IL 61920 or to Community Hospices of America Foundation, Inc. at chafoundation.net. Arrangements are under the direction of Selover Funeral Home, 555 Georges Road, North Brunswick.