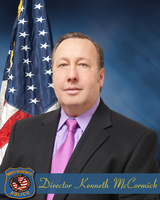 Kenneth P. McCormick died Wednesday, September 2, 2020, at Robert Wood Johnson University Hospital in New Brunswick. He was 59. Born in New Brunswick to the late Clarence P. "Mickey" and Helen L. (Petzinger) McCormick, he was raised and lived in North Brunswick, and served the North Brunswick community his entire career. He joined the North Brunswick Township Police Department in 1982, attaining the rank of sergeant in 1994 and lieutenant in 1999. Mr. McCormick became Police Director as a sworn officer in 2003. He retired as a sworn law enforcement officer at the end of 2007 after 25 years of service and later resumed the role of Police Director as a civilian where he remained until his death. Mr. McCormick was a founding member of the Central Jersey Police Emerald Society and was a member of the Middlesex County Chiefs of Police and the North Brunswick PBA Local #160. Surviving are his wife - Laura (Cano) McCormick; two daughters – Erika and Marina McCormick of Allentown; two sisters – Kathleen Feigley and her longtime companion Ed Kross of Bridgewater, and Paula McCormick of Apache Junction, Arizona; and a brother Michael McCormick and his wife Sharon of North Brunswick. He is also survived by nephews and niece Bryan, Kyle, Michael, Shawn, and Amanda, and many more loving relatives and friends. Kenny was kind to all and he saw the best in people. He put others first and loved his family and friends more than anything. He was the life of the party and lived life to the fullest. He would drop anything for a day on the water with his loved ones. He was the best father, husband, son, brother, uncle, and friend and he will greatly missed. Perhaps he said it best when he wrote: "Our destiny is not one we can steer the ship through with certainty. One thing is certain is that we can't take anything with us when we depart this life. Enjoy your life, forgive your enemies and worship your family. In the end how will you be remembered and by who? Soon we will all be a memory… let's hope it's a good one." Visitation will be Tuesday from 4:00 PM to 8:00 PM at Our Lady of Peace Church, 1730 US Highway Route 130 North, North Brunswick. Funeral services will be 11:00 AM Wednesday at the Great Lawn at North Brunswick Community Park, 2051 US Highway 130 South, North Brunswick. Burial will follow in Van Liew Cemetery in North Brunswick. Arrangements are by Selover Funeral Home, North Brunswick. In lieu of flowers, donations can be made to the Pancreatic Cancer Action Network or the ALS Association.