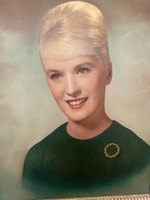 Diane B. (Starek) Pietrefesa left this earth on Monday, September 7, 2020, at her home in Cranbury. She was 83. Born in Carteret to the late Mary and John Starek, she was an only child. She attended grammar and high school in Carteret. Her mother, Mary, opened the Modern Maid Fashion Shoppe in Milltown in 1952 and Diane worked there during her high school years. After graduation she worked full time in the store. Soon after starting, she developed the skill of displaying the clothes in the store's front window. In a short time, people walking in the front of the store would complement her on how good the display looked. Salespeople selling items to the store suggested Diane display clothes in some of the stores in New York. When the store reached 50 years of business, the Home News wrote a story for the newspaper with Diane standing in front of the window. Diane always wanted to build her dream home. In 1994 she started putting the pieces together to present her ideas to an architect to develop the plans for her house. She moved into her dream house in November, 1995. Diane leaves behind her husband of 58 years, Patrick John "Pat" Pietrefesa; and her beloved son Patrick Jason Pietrefesa of Long Beach Island. Whenever Patrick visited his parents, he brought along "Eddie" his dog. Diane loved Eddie and the deep love was returned by Eddie. She was protected by Eddie if anyone touched her. She also leaves behind many relatives and friends. Some of Diane's favorite things included photography, lemon meringue pie, LBI, her god dog Eddie, shopping and fashion. She was an outgoing person and classy lady. Her family and friends are proud and fortunate to have known her. Memories last forever. The family is thankful to the caregivers for the past three and a half years. Diane will be missed by all she came in contact with. Visitation will be 4:00 PM to 6:00 PM Friday at Selover Funeral Home, 555 George Road, North Brunswick. Funeral services will be 9:30 AM Saturday from Selover Funeral Home followed by a 10:15 AM Mass at St. Augustine of Canterbury R.C. Church in Kendall Park. Entombment will follow in Holy Cross Burial Park in South Brunswick. Donations can be made to the National Kidney Foundation, Inc., 30 East 33rd Street, New York, NY 10016 or Alzheimer's New Jersey, 425 Eagle Rock Avenue, #203, Roseland, NJ 07068.