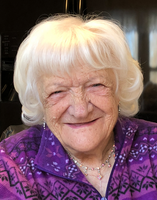 Gracia L. (Parisi) Prihodko died Tuesday, November 9, 2021, at Robert Wood Johnson University Hospital in New Brunswick on her one hundredth birthday. Born in Cold Spring, New York to the late Dominico and Donata (Vernacchio) Parisi, she was raised in Steubenville, Ohio and then moved to New Brunswick before settling in Milltown in 1964. She was a school bus driver for the Midland School in Branchburg and the Marie H. Katzenbach School for the Deaf in Ewing Township for 10 years before retiring in 1985. Mrs. Prihodko served in the United States Army as a secretary in the Allied Control Building in Berlin under General Dwight D. Eisenhower from 1945 to 1948. She was predeceased by her husband Peter Prihodko in 2014; her sons – Ronald Prihodko in 2006 and David Williams in 2012; and ten brothers and sisters. Surviving are her son Peter A. Prihodko of Steubenville; three daughters – Jan Prihodko and her husband Nicholas Dobromilsky of the Dayton section of South Brunswick, Lorna Prihodko of Nutley and Paula Greer and her husband Joseph of Steubenville; eight grandchildren; and a great granddaughter. Visitation will be 4:00 PM to 6:00 PM Monday at Selover Funeral Home, 555 Georges Road, North Brunswick. Funeral services will be 11:00 AM Tuesday at Selover Funeral Home. Entombment will follow at Franklin Memorial Park in North Brunswick.