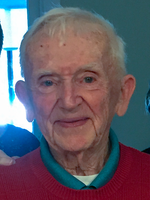 Joseph P. Simko, Jr. died Monday, November 15, 2021, at University Medical Center of Princeton at Plainsboro. He was 91. Born in Danbury, Connecticut to the late Joseph P. and Anna (Patlonick) Simko, he lived in North Brunswick for 50 years before moving to Monroe Township in 2019. He was a chemist and a supervisor at Colgate Palmolive in Piscataway for 38 years before retiring in 1996. Mr. Simko was a member of the American Chemical Society and the English Country Dance Society of Philadelphia. He was an avid golfer. He was predeceased by his daughter Joanne E. "Josie" Simko in 1995. Surviving are his wife Carol (Frazee) Simko; two sons – Steven J. Simko and his wife Jennifer of Shelby Township, Michigan and Jeffry P. Simko of San Francisco, California; his daughter Susan A. Simko of Basking Ridge; his brother John Simko of Hillsboro, Missouri; and two granddaughters – Sarah B. Simko of Ann Arbor, Michigan and Stephanie A. Simko of Henrico, Virginia. Visitation will be 10:00 AM to 12:00 Noon Friday at Selover Funeral Home, 555 Georges Road, North Brunswick. Burial will follow in Van Liew Cemetery in North Brunswick. In lieu of flowers contributions may be made to Catholic Charities Diocese of Metuchen, 319 Maple Street, Perth Amboy, NJ 08861 or at ccdom.org.