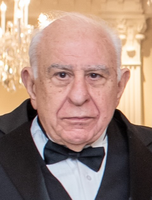 Born in Militello in Val Di Catania, Sicily, Italy to the late Nicolo and Nunziata (Fioretto) DiSilvestro, he immigrated to the United States in 1952 and lived in New York and New Brunswick before moving to North Brunswick in 1979. He was a highly skilled barber, who was loved by his customers. He owned and operated Town and Country Barber Shop on Easton Avenue in Somerset for 20 years before retiring in 2006.

He was a veteran of the United States Army and was stationed in France in the early 1960s. He was a member of the American Legion, Joyce Kilmer Post #25 in Milltown.

Visitation will be 2:00 PM to 6:00 PM Sunday, July 17, 2022 at Selover Funeral Home, 555 Georges Road, North Bruswick. Funeral services will be 9:15 AM Monday from Selover Funeral Home followed by a 10:00 AM Mass at St. Mary of Mt. Virgin Church in New Brunswick. Entombment will follow in Franklin Memorial Park in North Brunswick. In lieu of flowers contributions may be made to St. Mary of Mount Virgin Church, 192 Sandford Street, New Brunswick, NJ 08901.