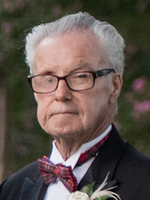 John Bruce MacAllister died Thursday, October 13, 2022, at St. Mary's Hospice House in Watkinsville, Georgia. He was 82. Born in Newark, New Jersey to the late John Joseph and Nancy Belle (Greason) MacAllister, he lived in Ocean Grove, NJ and Puerto Rico moved to Madison, GA five years ago. He was an electrician for the International Brotherhood of Electrical Workers Local #456 in North Brunswick of 43 years before retiring in 2007. Mr. MacAllister was a veteran of the United States Army having served in the 101st Airborne in the late 1950s and early 1960s. He was a life member of the 101st Airborne Association. He was a member of the First Methodist Church in Madison, GA. He was a 100 Ton Merchant Marine Captain and was keeper of the MacAllister Clan records. Surviving are his wife Carol Lee (Gebhardt) MacAllister; his daughter Tammy Kelly of Oceanview, New Jersey; his grandchildren – Carli Kelly and Collin Kelly; his brother Walter C. MacAllister of Millstone, NJ; two stepsons – Dr. Jeffrey Durmer of Denver, Colorado and J. Tucker Durmer of New York City; and four step grandchildren. Visitation will be 10:00 AM to 11:00 AM on Saturday, October 22, 2022, at Selover Funeral Home, 555 Georges Road, North Brunswick, NJ followed by an 11:00 AM funeral service at Selover Funeral Home. Burial will follow in the Gebhardt plot in Van Liew Cemetery, North Brunswick.