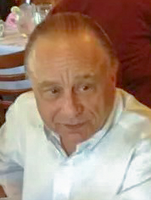 Michael V. Abruzzi died Thursday, November 17, 2022, at Brookdale Assisted Living in Monroe Township. He was 74. Born in New Brunswick to the late Nicholas and Vera (Biro) Abruzzi, he lived in Kendall Park before moving to North Brunswick last year. He was a karate Grand Master and owned and operated Golden Tiger Karate in North Brunswick for over 30 years. Mr. Abruzzi was a member of Life Church in Dayton. In addition to his parents he was predeceased by his wife Catherine (Lyon) Abruzzi in 2004; and his sister Marie Kadi in 2020. Surviving are two sons – Michael V. Abruzzi, Jr. and his wife Carol of Yardley, Pennsylvania and David Abruzzi and his wife Jen of Skillman; and six grandchildren – Anthony, Josephine, Nicholas, Angelina, Nora and Olivia. A graveside funeral service will be held 11:00 AM Tuesday, November 22, 2022, at Franklin Memorial Park, 1800 NJ Route 27, North Brunswick. Arrangements are under the direction of Selover Funeral Home in North Brunswick.