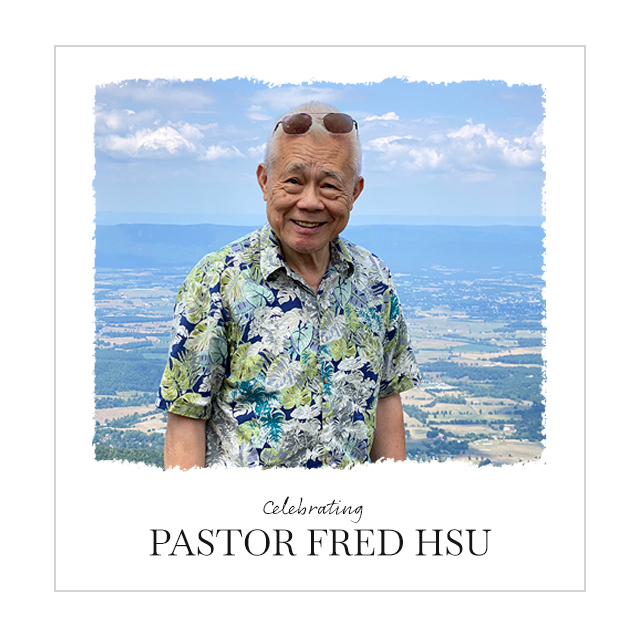 Please share a memory of Tsung-Shih to include in a keepsake book for family and friends.
View Tribute Book

For complete information, directions, photos and other information please see the memorial website at: https://www.papafredhsu.com/

Tsung-Shih Fred Hsu who was known around the globe as "Papa Fred" came to America from Taiwan in 1969. He came to America as a staunch atheist to study science, obtaining his masters degree in biochemistry and his PhD in microbiology from Rutgers University. However, during graduate school he gave his life to Jesus, and after his studies went to seminary and then spent the rest of his life serving as a pastor first at Rutgers Community Christian Church then at Harvest International Center in Somerset NJ.

His gifting included writing prolifically and speaking with clarity, making simple, things which might seem complex by telling stories he gained from life's experiences. He could be seen always taking notes on insights he learned from others, furiously writing thoughts down on napkins or anything else he could find at the moment. Throughout his life's journey he carried a personal intimate relationship with his Heavenly Father who taught him his life's greatest lessons: 1. To love his wife is one of the greatest blessings a father can give to his children. 2. What pleases our Heavenly Father is to have a family that loves each other even if from different locations, countries, backgrounds.

One of his greatest pleasures in the last decade of his life was to be "Papa" instead of Reverend or Senior Pastor. He said he learned that a true father is not threatened by those he shepherds. In contrast, he wants his children to become better than himself. He spent much of his last decade writing and speaking openly about the mistakes he made and the lessons he learned so that the next generation would be better than he was. Papa Fred is survived by his wife, Molica, his two sons Kevin and Kiley, his daughter-in-law Jacklyn, his grandchildren Aidan, Jana, Cara, and Liam, as well as countless precious spiritual children from here domestically as well as around the world.

Visitation will be from 5:00 PM to 8:00 PM Friday, November 12, 2021, at Selover Funeral Home, 555 Georges Road, North Brunswick. A Memorial Service will be at 2:00 PM Saturday, November 13, 2021 at the Community Baptist Church, 211 Demott Lane, Somerset. In lieu of flowers, Papa Fred's vision continues through the ministry of HIC, if you would like to support his visions please visit https://gohic.org/newine/index.php/donation/

Share Your Memory of
Tsung-Shih
Upload Your Memory View All Memories
Be the first to upload a memory!
Share A Memory