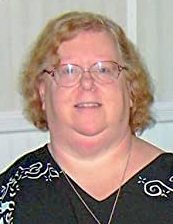 Born in New Brunswick to the late J. Herbert "Herb" and Eleanor M. (Casey) Clark, she lived in North Brunswick before moving to Monroe Township 10 years ago. She was a claims adjuster for Hanover Insurance as well as an accomplished writer. She was a feature writer for FATE magazine and had published books including An Irish Book of Shadows, Things Your Elders Never Told You, Graven Images and But Still They Come…1938 War of the Worlds Broadcast.

Surviving are her brother James R. Clark and his wife Nancy of St. Michaels, Maryland; two sisters – Jane E. Till and Diane Clark, both of New Hope, Pennsylvania; a nephew, three nieces and several great nieces and great nephews.

Private services were under the direction of Selover Funeral Home, North Brunswick. Memorial contributions may be made to the American Cancer Society at www.cancer.org.

Share Your Memory of
Katharine
Upload Your Memory View All Memories
Be the first to upload a memory!
Share A Memory