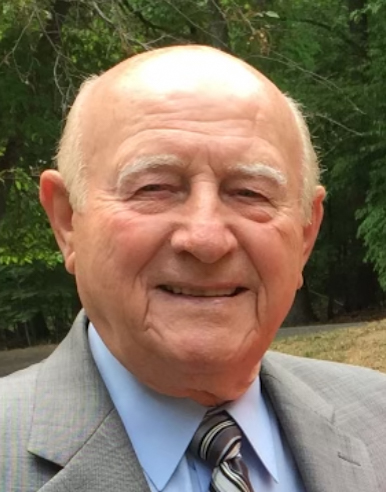 Please share a memory of Steve to include in a keepsake book for family and friends.
View Tribute Book

Born in Csót, Hungary to the late Sandor and Elizabeth (Butka) Bors, he immigrated to the United States during the Hungarian Revolution in 1956. He lived in New Brunswick before coming to North Brunswick 45 years ago. He worked as a plumber in the building maintenance department of Rutgers Community Health Plan in New Brunswick for 15 years before retiring in 1995. He also owned and operated Dari Delite on Hamilton Street in Somerset during the 1970s and 1980s.

Mr. Bors was a proud Hungarian who was an equally proud and patriotic American. Known for his charming blue eyes and his Shangri-La gardens, he enjoyed summers in Sea Isle City, his grandchildren, animals and his fish pond. He was a master tradesman who could fix anything (physically or emotionally) and he loved to do that for friends and family alike.

His wife Maria (Schrantz) Bors died in 2004. Surviving are his son Steven Bors and his wife Jeaneen of Bethlehem; his daughter Sylvia Bors of Frenchtown and her husband Key Wilde; his sister Angela Somogyi of North Brunswick; and four grandchildren – Ilona, Alex, Audrey and Liam.

A Memorial Mass will be held 10:00 AM Saturday, February 12, 2022, at St. Ladislaus Church, 215 Somerset Street, New Brunswick. Private cremation was under the direction of Selover Funeral Home, North Brunswick. In lieu of flowers contributions may be made to St. Jude Children’s Research Hospital, 501 St. Jude Place Memphis, TN 38105 or at www.stjude.org or to the North Brunswick First Aid and Rescue Squad, 880 Ridgewood Avenue, North Brunswick, NJ 08902 or at www.nbfars.org.

Share Your Memory of
Steve
Upload Your Memory View All Memories
Be the first to upload a memory!
Share A Memory