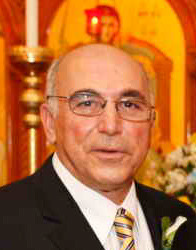 Please share a memory of Joseph to include in a keepsake book for family and friends.
View Tribute Book

Joseph Boyadjis, age 72, has peacefully passed after living a fulfilled life on Friday February 18, 2022, surrounded by his loving family.

Joseph was born in Mia Milia, Cyprus to the late Charalambos and Lefkothea (Karacosta) Boyadjis. He was a survivor of the Turkish invasion in 1974. Due to the invasion, he lost everything and took refuge in Strovolos, Cyprus until 1975. He then immigrated to Morristown, NJ with his late parents. In 1979, he married his beloved wife and began their family. Soon he became the owner of The Queen Diner. This new adventure relocated him to East Brunswick, NJ for the past 40 years. When subsequently The Queen Diner was taken by eminent domain, he became the owner of the very successful food business Cyprus Gardens, and later the owner of Melethean Foods. He was a proud self-taught entrepreneur who worked hard to support his family and made sure they were well taken care of. He was proud of his accomplishments. He most valued the time with his grandchildren, visiting Cyprus and Canada and spending time with his relatives. Joseph was always willing to help people in need without hesitation. He had an incredible positive energy that kept him going all these years, no matter the odds. He lived life his way and died peacefully knowing he made a beautiful family to continue his legacy.

Joseph was a longtime member of St. George Greek Orthodox Church, Piscataway NJ, the Cyprus Association of New Jersey and the Community Council of Mia Milia.

Surviving are his wife; Maria (Nicolaou) Boyadjis, his four daughters; Melanie Boyadjis and her fiancé Constantinos of Cyprus, Lefkothea Athanasatos and her husband John of Astoria, Theodora Boyadjis and her wife Amy of Jersey City, Andrea Herrera and her husband Enndy of East Brunswick; his six granddaughters: Maria Elease, Tatiana Fatima, Antonia, Barbara, Marina and Josephina Despina; his sisters: Chrystalla Ktoridou, Aphroulla Christofidis and her husband Andreas, his brother Antonakis Boyadjis and his wife Stavroulla, his brother-in-law Vladimiros Baroutis and many nieces and nephews. He is predeceased by his loving parents, his sister Efrosini Baroutis, his brother-in-law Andreas Ktoridou and his granddaughter Elease Herrera.

In lieu of flowers, the family would appreciate your support in helping make a difference by donating in memory of Joseph Boyadjis to:vital Leukemia Research: allbloodcancers.org/donate, St. George Greek Orthodox Church, Piscataway, NJ: www.gocnj.org/donations/donate or Blood or Platelet Donations at RWJ Hospital: www.rwjuhdonorclub.org/, (732)235-8100 Ext 221 or 228

To be held at Saint George Greek Orthodox Church

*Arrangements are under the direction of Selover Funeral Home, 555 Georges Road, North Brunswick.

For those who are unable to attend but would like to be a part of the service,

"God saw you getting tired

and a cure was not to be.

So He put his arms around you

With tearful eyes we watched

Although we loved you dearly,

We would not make you stay.

Your hard-working hands put to rest,

God broke our hearts to prove to us,

He only takes the best."

Share Your Memory of
Joseph
Upload Your Memory View All Memories
Be the first to upload a memory!
Share A Memory